Watch Out For Bone Cancer 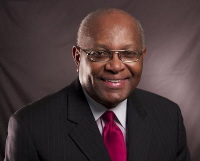 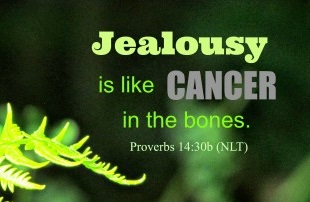 Proverbs 14:30 (NLT) – A peaceful heart leads to a healthy body; jealousy is like cancer in the bones.

There’s an old story of two shopkeepers who were bitter rivals. Their stores were directly across the street from each other. If one got a customer, he would smile in triumph at his rival. Day and night each strove to outdo the other.

It soon became more than a game, it became a match in jealousy and anger. One night an angel appeared to one of them in a dream and said, “I will give you anything you ask, but whatever you receive, your competitor will receive twice as much. You can be very rich, but he will be twice as wealthy. You can live a long and healthy life, but his life will be longer and healthier. What is your desire?” The man frowned, thought for a moment, and said, “Here is my request: Strike me blind in one eye!”

Jealousy, although often overlooked, can be a very dangerous emotion. James 3:16 states, “For wherever there is jealousy and selfish ambition, there you will find disorder and evil of every kind.” Jealousy is therefore not to be trifled with as it can lead to evil of every kind.

What is jealousy? It’s an unhappy or angry feeling of wanting to have what someone else has. It often results in feeling resentment towards someone because of that person’s success or some advantage they appear to have over you.

The story of Saul and David is a classic story of jealousy. King Saul was greatly blessed by God and was brought from obscurity and made King of Israel. But after David slew Goliath, the people said, “Saul has slain his thousands, but David his tens of thousands” (1 Samuel 18:7). Because the people made more of David’s single victory than all of Saul’s, he went into a rage and became greatly jealous of David. From that moment, he plotted to kill David. Instead of building up Israel, Saul wasted his reign chasing David through the hills.

Saul was so taken up with David’s success, he forgot the blessings he actually had. After all, he was still King of Israel! Jealousy makes us behave as if God’s resources are not sufficient enough for Him to bless others and still bless us. It poisons attitudes by making us compare ourselves with others. Jealousy makes us dissatisfied with God’s blessing, robs us of joy and contentment, and may even destroy us. Saul’s jealousy cost him contentment, his throne, his family and ultimately his life.

Like bone cancer, if left unchecked, jealousy will spread. So let’s watch out for this “cancer in the bones.” Treat it as seriously as you would any cancer, because it’s deadly. It can destroy your relationship with God and with others. Ask God to search your heart. If there’s a root of jealousy, repent of it today.